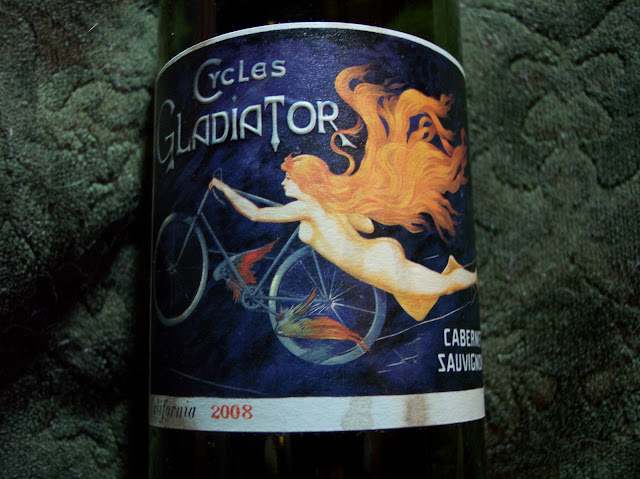 Back in August of 2009 the powers that be which reside on the Alabama Alcohol Committee got their panties in a wad...over the lack of panties. A French bicycle ad from the 1800s was a tad too racy to slap on a product which is only sold to people over 21. And the thing is, as you can plainly see...it's not in a suggestive, full-on, horny-porny pose. It's just a drawing of a naked nymph...but, Alabama stated that children would see these wine bottles in stores (so, keep your kid away when you buy your alcohol) and their little brains could not handle a side-view of a stylized art depiction of a nude lady. What you are seeing here is a tiny button of a nipple and a somewhat Rubenesque tushie. Yeah...too much for the people at the Legislature and Alabama's Board of Alcohol Commission to wrap its dirty little heads around - so they banned it so we wouldn't be able to wrap our dirty little hands around any bottle in the state of Alabama...ever.

But...as you see...I have one! I bought it in Atlanta - and it's probably illegal for me to own it in my state...but that's just the rebel...or actually, the yankee...that I am. I am keeping my nude nymph'd bottle and giggle like a displaced New Jersian schoolgirl each time I look at it and think back about how this controversy was blown completely out of proportion and more than a tad too insane in this day and age. After all, heaven forbid someone drink a bottle of wine without a naked chick on the label and they end up butt naked; at least with this bottle -- there was truth in advertising, right?  "If you drink this wine you might get as naked as this labelled lady...don't say we didn't warn you!"


But I guess it's easier to walk around with your eyes totally open but your mind totally shut when you make the rules in this state.

Cheers!
Posted by Mariann Simms at 7:00 AM