Since 1 April, we've all been tasked to take photos given the stipulated theme...and we've all done them relatively well; some better, some worse, some odd, some with animals, some with manipulation.

Well, since Monday, mine have taken a sinister turn in a way...mine are all versions of the theme...but the theme as it plays out when you have a flu. Today's photo was no exception.
First off, please go 'round to all the other participants of the non-contest and see what they've come up with as I'm sure you'll be inspired much more than if you only looked here. Their names and links are: MikeWJ, Nicky and Mike, Mo, Meleah, John, aka nonamedufus, Bryan, aka Unfinished Person, Malisa, Nora, LaughingMom, Tanya, Elizabeth A., 00dozo, Cheryl, Kristen, Katherine, and, last -- but definitely not least, Ziva. 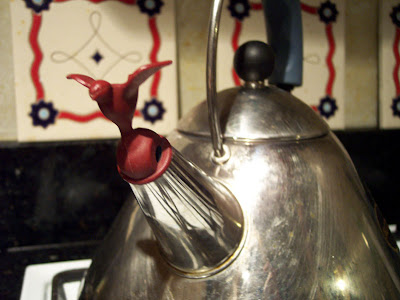 This is my Alessi tea kettle I've had for at least 25 years...it sports a little bird whistle made out out of moulded plastic or high-heat resin fibers or who knows what it is...but it whistles when the kettle boils. I've been using the tea kettle a lot lately as I'm sick.

Truth be told, my son did not appreciate the angle and the staging of the kettle in my photographs and took a couple of his own. He was right. They were better. I never claimed to be artistic...he was always the artistic one. So, in a way, I believe he deserves credit here and all I deserve is the fact that I came up with the kettle/bird whistle idea. So, if I have to be moved down to the bottom of the pile...go ahead and do so -- as I already feel low enough with my sickness.

I was going to "capture a whole other bird" - but my children told me it was too juvenile to do...so I didn't...but it did indeed capture how I felt about feeling sick, that's for sure.

Posted by Mariann Simms at 7:00 AM