The theme today didn't go as I planned.  For some reason my camera refused to work at my daughter's "National Honor Society Induction Ceremony: last nite...and all the photos came out as little X's.  Nice keepsakes, nonetheless, I am sure.  So, I had to improvise this morning...but first...

...go look at my fellow non-contestants...and don't forget to thank Ziva for coming up with this idea... 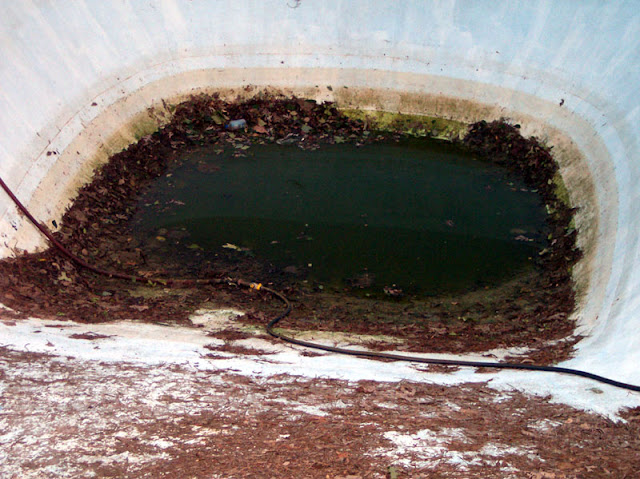 It's that time of year again - when we drain the pool because we are too lazy to keep it clean during the off season. It's also cheaper to just drain it and put new water in it - and more sanitary, because this is what gets into your pool at the end of the season if you let it accumulate and rot.


There are also about fifty frogs crowded in there which all jump into the murky depths once they see anything approaching. There's probably also about a zillion frog eggs in there by now, too...and those water boatmen...you can bet there's a whole crowd of those things in there just waiting to shear off your skin if you are stupid enough to pick one up and put it in your hand because it "swims cute".


The leaves and pinestraw go without saying...you can definitely see there's enough crowded in there to make a fine smelly paste of waste debris. Ahhh...take a deep breath...nothing smells like Spring like the bottom of a vase of flowers left too long in the water; magnify that intense pervasive "perfume" and you might get a partial idea of what must be decomposting their little body parts away, en masse, to ensure a place in that last foot of precious water. And right about tomorrow...the mosquito larvae will decide to take up residence (if they haven't already)...and speaking of crowds...there'll be millions of their little wiggly selves pushing thru the waterworld to enter the airy world...and nothing can dispel a human crowd so quickly as a whole swarm of hungry mosquitoes in search of that first blood feed.


Yep...just to look at that photo and think there's nothing in there...is pretty ludicrous. By square inch, it has more useable real estate than any one of Donald Trump's properties...and many, many, many more squatters.

Posted by Mariann Simms at 7:05 AM