The "Bliss" Leading the "Bliss"

It never ceases to amaze me the way some people can be totally insensitive and ignorant. Case in point - online comments left by people following a news story. Not just any news story...but a tragic news story.

Now I am not stupid, I know these people are typically commenting to get the ire up of other people...but to gleefully post repulsive statements following someone's untimely or horrific death or life-threatening ordeal...I seriously could never fathom doing so. Even if I were a child, sitting around with a group of friends - I really don't think I could bring myself to do it...or if I did, I'd scurry and delete my comments after they left. You see, I was never the person who made fun of other people in school or at the mall - I was the one saying "hey, a person can't really change the way they look, you know". And don't tell me one person can't make a difference...they stopped doing it, at least in my presence.

Why do people feel the need to berate and make fun of another's misfortune? Is this whole online anonymity destroying whatever shred of decency we once had? Why can't people funnel their anger in a more positive venture...why prey on people whose circumstance they themselves [hopefully] wish never to endure in their own lives?

And these people live among us. They are our bosses, our baggers, the guy in front of us at the light, and, yes, perhaps even the lady next to us in church. The guise of anonymity makes people believe they are impervious to the side glances and finger pointing they would normally get out in the open...so to their privacy of their homes they retreat with their cruel thoughts, keyboards and fantasy screen names at the ready.

Keep in mind there are a lot of such comments online - don't believe me, click on one of those horrific news stories and read the comments. I was just now reading some regarding a 14-year-old boy who had been tripped/fell/collapsed while walking down the stairs to claim a Nintendo Wii he won at a hockey game in Providence, Rhode Island. I read similar, but even worse comments, regarding Natalie Holloway the other day. Oh, yes...let's just make fun of the girl who, in most likelihood, was killed in Aruba. I don't know about you, but I can't think of a more productive and pleasant way to pass my time during the Thanksgiving holiday.

How disturbing must it be for family and friends to go online and peruse the comments, thinking people are sending prayers and well wishes their way only to be met with a barrage of verbal brutality? I cannot imagine the thoughts those people experience...why can't people have more empathy for their fellow man and realize words said in anger or jest can have lasting effects. I know all too well how those "names will never hurt you" words do indeed hurt...and they can stick in your head and play all kinds of wicked games in there...for years and years.

So, I will continue to be amazed at the ignorance of others - (and I'm not just talking about their spelling and grammar...don't get me started on that, as that's for another blog) shake my head and wonder just what makes these people tick...and know deep down that it certainly isn't their overly compassionate heart.
Posted by Mariann Simms at 7:59 PM 1 comment:

Sorry I haven't been doing a "blogumn" (oh read the rest of my 'blogumns' here, you'll find it) here lately - but with my hysterectomy recovery I just have been doing less around the house, here and with my comedy site - but I feel a lot better today than I have in the last few days, even without my hormone patch on. So, I'm going to try to sit here and focus (oh ha ha - like that will happen with my brainfog going on) and get a contest updated and get a blog written.

Pixar vs Pixart vs Pixaren't

Okay, I just watched "Ratatouille" and I'm probably the only person in the world who feels this way, but...I just didn't like it.

My kids kept asking me at different points throughout the film, "Is this a 'feel-good' movie?" - to which I have to say, "No." It just didn't seem plausible to me. Yes, yes, I know - it's an animated movie, it's not SUPPOSED to be plausible, right? Well, I beg to differ...all the animated movies that I liked tended to have something believable in them, even if they were extremely fantasy-based. This to me was more like a hodgepodge of ideas thrown out around a table while a couple guys were getting drunk. It was, in essence, Pixar's Atlanta Nights if you will. Sure, the animation was top notch...but that just doesn't cut it to me.

Spoilers here...so don't read if you don't want to know more (altho I'm probably the last person to see this film as I always wait until they are out on dvd)...

A rat that can cook...then said rat being able to pull the guy's hair (who also just happens to be the lowest guy on the totem pole in the haute cuisine restaurant) to control his body movements, then him ending up being the guy who inherits the restaurant, then having it closed down due to rat infestation...only to open another restaurant which apparently caters to the "rat-friendly" who don't mind their meals prepared by vermin. Um...I just don't see anything plausible in the film nor anything fantasy-ish enough to make it credible. Each of these Pixar (or Pixarotype) films score high marks for their incredible art technique...but this one lacks what the others that I've seen had going for them: the ability to take you away for an hour and a half to a fun little world.

"Monsters, Inc." was plausible - a little world filled with the dreaded monster in all our inner child's heads...even if you were OLD like me, you'd hearken back memories of what you saw, i.e., imagined was under the bed, in the closet, scratching at the window, etc. Then to find out the monsters were as scared of us as we were of them...well, that was pretty darned brilliant.

"Toy Story" was plausible - a boy whose toys come to life because, well, we all wished our toys did when we were kids...and secretly thought they did when we weren't in the room...kinda like how all pets can talk only they don't let you know because you'd expect them to do subservient things for you then.

"A Bug's Life" was plausible because we really don't know what bugs do - and for all we know their social structures are far more elaborate (at least in their own realm) than we'd ever give them credit for...until you watched this film. And face it, we've all seen those ants who sacrifice their bodies by stringing themselves across water so the others can make it safely to the other side...so just right there it gains some redemption.

"The Incredibles" - oh, who hasn't wondered what a washed up Superman or Batman would do? And who wouldn't like the whole idea of being able to be useful and young again and save the world - plus have nifty superpowers to boot?

See? All of those have a lot going for them from the get-go - they didn't need 14 different angles to attempt to pull it all together, which to me, fails, except for the fact it has kick-ass computer effects.

Now...don't even get me started on the other film we watched the other day that the whole country went ga-ga about which my kids and I kept looking at each other with that "what the....???" look on our faces: "Happy Feet" - yes, that had a lot going for it - dancing penguins...everyone loves dancing penguins...let's just animate a bunch of penguins. Story? We don't need a story...we have cute dancing penguins! Look, I got my fill of dancing penguins in "Mary Poppins"...and the three minutes they were on screen in that - well, it held more plot (and my attention) than the 108 minutes they used up in "Happy Feet". My feet were only too happy to walk over to remove that disc from my player as well.
Posted by Mariann Simms at 12:31 AM 6 comments:

Well, as luck would have it...or more simplified (or would that be complicated)..."Murphy's Medical Law" my daughter has been sick starting from the time I was in the hospital and is still sick. We found out the other day that her tests for Mono were indeed positive, so that's a relief...at least knowing what it is and that it's not something worse.

She's been out of school for a couple weeks on and off because of it and I haven't been able to drive because of my recent hysterectomy, so my constant trips to stop off at The Fresh Market (for those of you living here in Montgomery) on the corner of Vaughn Road and Eastern Blvd next to TJ Maxx. I love The Fresh Market - or as I call it "Fresh Market". I cook a lot of gourmet meals and their produce/meat selection, and above all, quality, is second to none in Montgomery...it's a wonderful place to shop if you are strictly buying food...and if you want that food to be top notch.

Today my husband went there to get us some things, and I don't know exactly the conversation, but they asked about me (and probably why they haven't seen me and my daughter every day like usual) and he told them about my operation and about my daughter being sick as well.

Then the manager did something extremely kind: he gave a bouquet of yellow roses to me and one of pink carnations to my daughter. (Nice blurry photos below...taking them at night doesn't help the clarity.) That was very sweet and I promptly phoned him up to thank him. You don't usually get that type of human interaction/contact in other stores I am sure. I've always told everyone I love the fact that I know who the meat people are by name, the cashiers by name, the managers by name, etc., and they know me. That's the way it should be...and touches like the flowers are evidence that places like this and caring customer oriented people like them still exist. 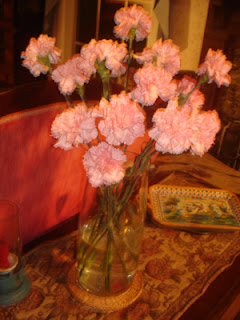 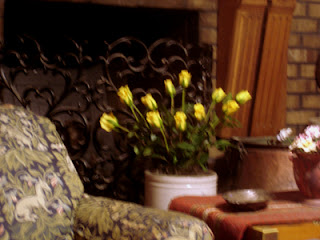 Again...thank you Fresh Market for hiring classy people who take the time to get to know their repeat customers and go that extra distance to make us feel special and respected.
Posted by Mariann Simms at 2:14 AM 1 comment: