You've seen it, in fact you've heard it - people who act oblivious to all those around them as they somehow imagine themselves to either, a) walk around in their own little bubbles - like a sci-fi movie - a force-field they put up which makes them impervious to any and all exterior penetration combined with some silly notion they have this Maxwell Smart "Cone of Silence"...mentality which, in turn, makes them think no one can hear them; or, b) are just more important than anyone else.

My money's on "a"...but that's neither here nor there. How someone can tune out all manner of things and in the same process, lose all manners...continues to amaze and astonish me.

Oh, I'm not saying I'm the most versed in refinement - but I don't go through check-out lines gabbing away on my phone, never acknowledging the "have a nice day"s. I also don't walk around with "Bluetooth/Hands Free" technology in the store -- looking like I'm either aimlessly talking to myself. I can't tell you the amount of times I said "excuse me?" to passing people thinking they were engaging me in conversation...only to be ignored, nary a word directed my way...totally oblivious that I exist and actually said something to them. The "tunnel-vision" glare they give - that "Stepford Wives" blank stare...is the only clue I have that I misspoke.

But the end of all breaches of cell phone etiquette - worse than the annoying guy in the theatre who "forgets" (numerous times) to turn his phone off...with EACH subsequent call and audience admonishment, was the guy who was sitting (with the obligatory empty chair between us) next to me today at the base clinic.

He gleefully sat there - in full voice - calling company after company checking on the status of various payments. HOW do I know this?? Well, it wasn't bad enough he was on hold listening to such classic ditties as Barry Manilow's "Copacabana"...apparently I had to be on hold with him. And there he sat, undoubtedly unconcerned that, instead of holding the phone to his own head, for his ear only - he felt somehow compelled to share his private insurance claim business with anyone within earshot - by taking advantage of his phone's "speaker" feature.

With phone prominently displayed in a two-hand hold before him, he sat there, legs akimbo, and slightly hunched over at the waist...his eyes intently watching "it" - like you see people portrayed watching radio programs before television was invented. It was if...he was mesmerized by it. I, on the other hand, was less impressed.

Oh, I'm sure I'm going to one day find something someone does with their cell phone more annoying, more insensitive, or more bold...this one will hold that place of "prominence", at least to me, until that time.
Posted by Mariann Simms at 12:49 AM 4 comments:

I've been wanting to do a blogumn about this for a while...but hadn't decided on an angle...thinking perhaps I just ought'n not do it (yes...I put that in specifically as an "in-joke" for one person...so there, I did it) - so, therefore, that means I will. This same person figures I'm being too much like the female version of Andy Rooney with my opinions lately...probably just because I'm getting old and curmudgeonly...but, what the heck...I'll run with it - or at least trot a little...

Just what IS it with toe and thumb rings lately? They look awfully silly and quite uncomfortable to boot. In fact...if you were wearing a toe ring AND a boot...I bet it would be all the more uncomfortable.

I remember, back in the 1960's - toe rings and thumb rings started to be quite the sensation...but they also had the Indian-inspired toe-ring "attached anklet" which made it look like much more of a fashionable accessory than the simple "got my toe caught in the gasket of my tub's faucet and I decided I'd run with it" kinda thing. In fact, if I'm not mistaken - this toe-anklet chain was quite akin to the middle finger-bracelet chain...which also had that whole "Hindu-inspired, Maharishi Mahesh Yogi, Beatles, George Harrison-influenced, Ravi Shankar, sitar-playing, patchouli incense burning" era thing going on - which, I, as a child growing up in New Jersey...would see first-hand because we frequently made near-monthly Hippie-watching pilgrimages to New Hope, Pennsylvania - way back then when these things...and Twiggy...were, literally...in vogue.

Now...I was too young to don toe rings or toe ring-anklet chains back then - but I remember them clearly as I have an older sister...who really isn't that much older than me...but always acted much older than she really was. That not being here nor there...I remember certain things distinctly...and this was one of them.

Then the 60's made way for the 70s and they, in turn, brought in the 80's and MTV and Dynasty and no one on prime-time television back then would be caught dead wearing anything less than shoulder pads and attitude. The 1990s came and fashion went out and it still really hasn't returned if you ask me...but...toe rings and thumb rings are now back...and I've just got to ask everyone... 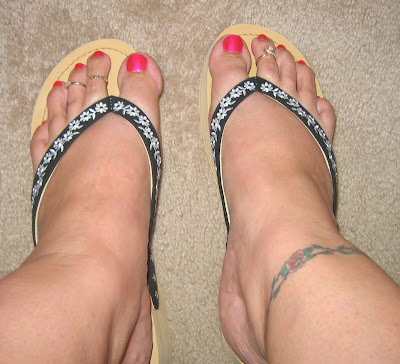 And the thumb rings I've seen aren't particularly attractive...they typically look like those bird-banding rings they tag onto birds in the wild to track them...plus they look about as comfortable. They aren't ornate...and simply look completely out of place on most people...but I have to keep coming back to the Indian/Hindu culture as to why there's a resurgence with them. Certainly most people aren't archers who wear them (oh, yeah...I did some research here on thumb rings)...and as far as I can tell archers really aren't on the fashion forefront...so I'm going to blame it on Bollywood.

So, my theory is that back in the 60s - Hindu influence was everywhere...and these toe and thumb rings cropped up. Of course, most of the people who are wearing these today weren't even around back then to remember any of this - fortunately there are old people like me to remember. And recently, especially with the success of "Slumdog Millionaire", Bollywood films have taken everyone by storm...thus we're thrust back into the whole concept where everything old is new again...and, like those circular toe and thumb rings...they came around again.

But, unfortunately, most people can't pull this look off...and seriously...most thumb and toe rings I've seen on people...look like they couldn't pull them off either - at least not without some pain and soap or butter involved.