I have a friend who is a photographer and I asked him a couple weeks ago when the best time of day it was to get a photo. He told me it was between 5:00-6:00 a.m. So, the other day I'm going out to get the previous day's mail (I sleep strange hours) and I noticed the moon was out and it was between 5:00 and 6:00 a.m. I went back inside the house and took my allotted five to seven photos before my camera battery loses its charge and I walked back inside satisfied one of them might be in focus.
I wanted to show the moon against a background of antiquated ugliness...i.e., the power lines that stretch across what would otherwise be a really nice view of the moon. Sure, I could move a foot or two over and the lines wouldn't be in the photo - but then again I wouldn't be able to show how friggen ugly my obstructed view of the sky was.
But, before I get any further along in my story and max out my 250 word limit (ssssh...I only count the stuff BELOW the photo in my word count)...go on over to these "30 Days of Photography II" participants and see what they came up with for todays theme (ugh...because Blogger.com screwed up formatting today and auto-upgraded me...I cannot get the "auto-linker" to link without doing them all manually again, and honestly, I'm still sick...so, please go here to see a list/link to each person:  Ziva's Inferno 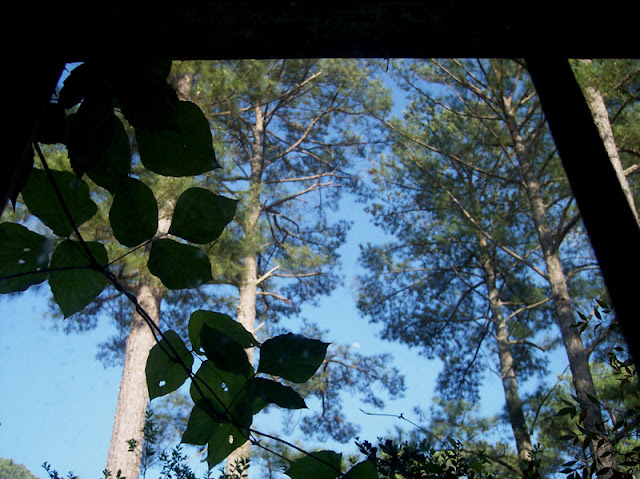 So...I knew today was "moon day" and I went into my little camera card to fetch a photo out and I'm scrolling thru the approximately one-half million shots of kitties and ferrets and glasses of Martinis...when I ran across one which caught my eye. It was the one I took from inside my house on "From an Ant's Perspective" day.
I think there is a moon in the photo - and because I took it totally by accident, I thought it would be nifty to post it up. I didn't crop the photo or anything - because I wanted the moon to be shown in my "totally by accident" shot. You know, kind of like how they managed to get a man up on the moon...totally by accident (or, for people who totally disbelieve the whole "moon-landing" thing because I saw the space capsule they used in one of their early moon missions at NASA's Space Camp in Huntsville...and there's no way in hell -- other than in a MacGyver episode, that seven rolls of tin foil, a radio from a 1968 VW, and an Erector Set missing some key pieces -- made it all the way to the moon and back).

Posted by Mariann Simms at 7:00 AM