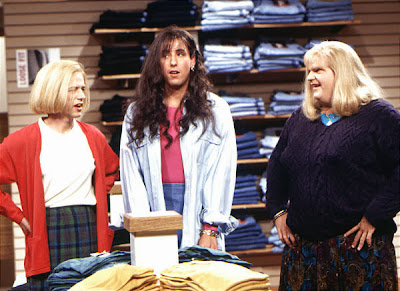 My Facebook friend posted a Tumblr post (from November 2011) the the other day...and...well, after reading it, I just had to comment.  It really got my ire up...which usually doesn't happen that much...well, as far as responding with a blog of my own to counter another person's post.  In fact, it's never happened before.  I was more than a bit miffed...and I couldn't remain silent.
My friend (who posted this - but did not write it) works in the retail business, and I'm certain she is a hard-working, nice, friendly, and very helpful person who deals with jerkwads every day.  I feel sorry for all the people who are also hard-working, nice, friendly, and very helpful people who have to field a bunch of self-righteous ignorant people who think it's funny to do the crap they do because they can do it.  I, however, am not one of those people and I did take offense to this posting.  Allow me to tell you the story from MY side of the counter.
I will post the link of the posting (not copying the whole thing it in case they get mad at me) - and take each item one at a time, in the order they are shown in the post.  Please check out their article first - so you can see the full comment for each item.  It's imperative that you do so in order to fully understand my comments.
http://rocksteadyash.tumblr.com/post/12403420976/what-retail-employees-want-you-to-know

And, remember...being nice to people doesn't take an extra effort...that is, if you're used to doing it.