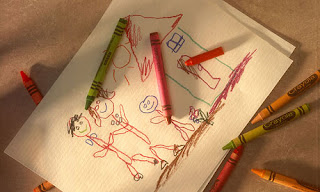 Well, my attempts to gain employment in this town have again been shot down and that got me remembering a pre-Christmas silliness I wrote up and posted on Facebook. This got about as much interest there as it will here, but I figured my calendar blog was going to be much better than it was, and it wasn't, so I scrapped that idea; you will get this one instead. This was "inspired" by countless Facebook "friends" sharing their "oh-so-talented" kids' drawings with one another -- and then their friends "oohing" and "aahing" over them -- sounding about as genuine as a porn film starlet.

In my world (which is about as wide as my sofa)...this would be the perfect job for me until some ad agency scoops me up right before I get hired to write my novel...

For a limited time only I will critique your child's artwork or story they've made up. The cost will be $10.00 for three; yep, you heard it right...THREE pieces of artwork and/or stories. Two stories and one drawing of the outside of the house with your whole family standing outside? No problem. Three stories...even if written in crayon -- heck, I'll take them all on.

As the 2003 winner of the "Bulwer-Lytton Fiction Contest", I feel I am more than qualified to do the writing portion - and as I've been attempting (not attempting very well, mind you) to be a docent at the art museum here...I also have some qualifications for that as well.

Afraid that your little Chagall or Michelangelo is only a three-year-old kid and not a protege? Do you want the validation to NOT have to stick that piece of crap they call "art" up on your fridge? Well, scan them and I'll do it for you. I will give you an entire write-up telling you my feelings...from a realistic and completely unbiased opinion standpoint.

If your son is more J. K. Cringing than J. K. Rowling...I'll be the one to let the hammer fall - and you can walk away with a clear conscience. You won't be disappointed in yourself when you hear those muffled sobs coming from the bedroom...because you will know you honestly didn't just break your little "writer's" dream -- I did.

So, again...this is a limited time offer - the price gets bumped back up to $5.00 each after the 1st of the year. Take advantage of our "Before Christmas Plan" -- a personalized lovely letter (sent by me) with gold stickers and happy faces all over it if your child has any talent whatsoever. Your little one will be running to check the "real" mail each day to see if their envelope has a "Mr. Happy" or "Mr. Yuk!" sticker on it. Either way, you'll thank me...plus they'll get exercise...OUTSIDE!

It's a win-win situation for all!

When I was a young, whenever I got slightly out of hand, my mother would say, "Oh, you little Dickens, you!" Now, I still have no inkling where that phrase originated...I'd like to think it has something to do with the unruly children in Dickens' novels...but a search on Google will probably ruin it for me...so I'll remain none the wiser and keep the mystery going.

Another mystery to me, is why, on the 30th of January, I started posting up my versions of Dickensian Facebook update statuses. Certainly it had something to do with the fact I finally got around to watching "Great Expectations" (the 1946 version) a day or two earlier. But, truth be told, I did have this film recorded for about six months, so it wasn't like it was "Dickens Week" on the TCM channel or anything.

I must say, however, that I could not have timed it any better...because today just so happens to be the 200th birthday of Charles Dickens.

The premise for most of this is self-explanatory...but, in case it's not...I basically updated my Facebook status...but with a twist (pun intended): I "penned" them in the manner of what I envisioned Dickens' characters would say...if they were thrust into today's society...and doing their own Facebook updates. Hopefully you will find some of them mildly amusing...and if not...well, a solemn egad to you, sir!


It all started late the evening of January 30th...and into the early morning of the 31st...and yes, I try to be silly on purpose on Facebook. To me, everything on Facebook is just fodder for a writing gig for a future comedy show...the key is timing it right so someone sees it and is willing to hire me. Unfortunately, I haven't yet found that key. Anyway...I was in a silly mood and it started like this. (Be forewarned, these are only my comments...I removed everyone else's...to respect their "privacy". Oh, yeah, right...they are ON Facebook...there is NO SUCH THING as privacy anymore. By the way, I left typos in...it lends an air of authenticity that way.)

I was thinking that I should start doing Dickens type books. I mean it's about time someone does that again. I have to put dandy guys in it and foppish rogues. Is that okay to do or just too old a concept?

"I dare say, Mr. Slipwort, your buttocks peering out like a timid doormouse owing to the fact your trousers are lower than your waistcoat...is more than mildly arousing to a young man of my demeanour."

(More removed comments here.)
"ROFL Nothing actually. I watched "Great Expectations" last nite and thought how we really should talk more like that. It would really make people just stare."

(Yep...comments...yadda yadda...)
"You come to me, lad, with the countenance of someone much more refined than yourself and with some reservation, attempt to beg my forgiveness for indiscretions heretofore dispensed...and ask for more text minutes? A solemn egad to you, sir."

(This is where someone stated they were going to use "A solemn egad to you, sir" in their conversations the next day. I was, needless to say, honoured.)
(Then it kinda morphed from Dickens to Shakespeare.)
"It is with some foreboding that an item of particular interest was shown to me under the guise of a fictitious nom de plume...and interspersed among a certain morally corrupt group gathered in society known to assist in the dissemination of such correspondence with the words "I am soooo stealing this!" attached and then, with a click, dispatched thusly."

But...I'm still wondering why the whole thing surfaced in my head right before his 200th birthday. I'd like to think it's some type of a good sign...perhaps I'm actually channeling Dickens? (And not in the TCM kind of way.)
Okay, so maybe it's not up to par with the last thing he ever wrote...but he's been out of practice, so cut him a break.

Happy Birthday, Mr. Dickens...gone, but certainly never to be forgotten.