When I was younger, one of my dreams was to write a book...the other was to win a gold medal at the Olympics. So far, I'm pretty much 0 for 0...which isn't bad considering some people out there who won a gold medal in the Olympics didn't really win gold ones...and some...they probably just keep in the box on their mantle behind that commemorative plate of Charles and Diana. (Hey...it's being held in London...I thought I'd "Brit" it up a bit.)

Each Olympics they basically give someone the incredible honour of designing that year's Olympic medal...and when you think of gold medals, you usually (if you are old like me) have the image of Mark Spitz' gold-laden chest indelibly stamped into your brain. 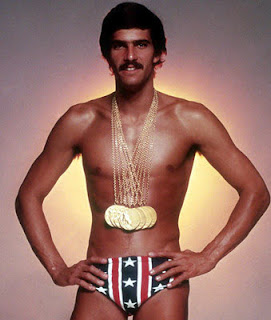 Some Olympic medals...eh...not all that photogenic.

This got me thinking (when I was talking to a friend) that I remember one of the medals a few years back which basically was this chunk of crystal. Yeah, crystal might be nice in chandeliers and fancy wine glasses...but, me personally, would have been highly let down if I won a gold medal predominantly made of high end glass. "Cheers!" Sigh...it's not only made of glass...but it's ugly. I spent a dozen years of my life training to win something I might break if I drop it?? Great. Thanks Olympic medal picker people...thanks for shattering my dream and making it look like something the luge gouged out.

After talking about that...and finding out how difficult it is to find a pictorial history of Olympic medals while the Olympics are in progress...I managed to find all the medals given out since the onset of the Modern Games...dating back to 1896. Talking about a let down - they gave the winner a silver coin and a laurel branch. The runners-up...only got the branch.

While branches wither and die...unfortunately, these medals live on... 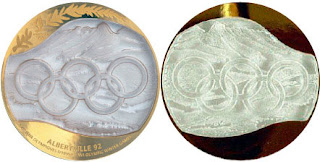 I didn't know that "crop circles" was a Winter Olympic event...I'd have guessed it was a Summer one -- Grenoble 1968: 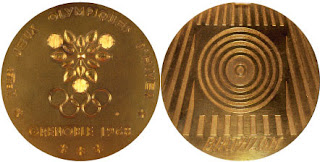 Sapporo, if I remember correctly, was where those cute little snow monkeys liked sitting in the hot springs. Apparently, they also designed their wacky Winter Olympics medals as well: 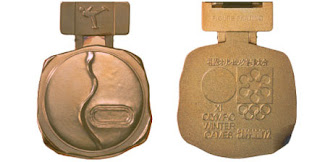 You thought monkeys designing medals was a bad idea, right? No, you are wrong...having your two-year-old kid design one on their Magna-Doodle is worse. I present to you, Lillehammer's 1994 Ski Jumping medal...if you look at the jumper as if they are going in the other direction...it looks like a Zombie on skis. While I'm thinking that would have been a really awesome medal design...they had others...for each of the Winter events. This one is, by far, the best: 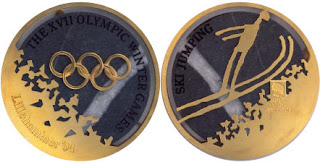 Hey, cool...I always did wonder what they did with all those old Korean coins...kind of odd they gave them out at the 2006 Turin games in Italy, tho: 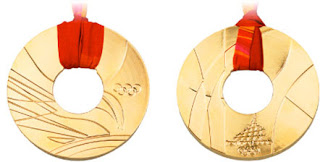 You can't really tell - but these Vancouver 2010 medals were all misshapen and did not lie flat...they were also made with recycled electronic waste materials for their base. I guess that's one way to get rid of your country's toxic garbage: 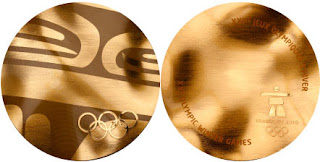 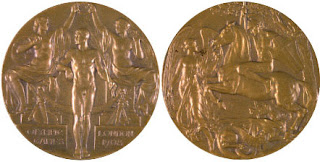 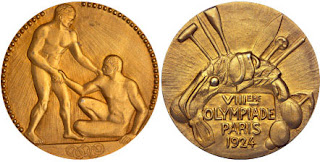 There was a long stretch of time where the medals showed more tasteful depictions of winning...but then the 1972 Munich games came and went with much heartbreak. While they will also be remembered by stellar performances by American swimmer, Mark Spitz, and Soviet gymnast, Olga Korbut, they will, unfortunately, always be marred by human tragedy and not "naked aliens on a medal" only tragedy, like they rightfully should have been: 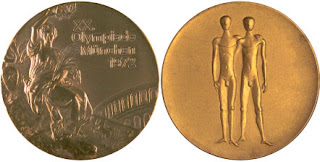 Thanks to "BBC News - London 2012: Olympic Medals Timeline" for all the Olympic medal-abilia.  Go and check out the link -- it's absolutely fascinating and fun!

(I have been wondering if the 2012 London games' medals are the largest in diameter [85 mm], as they certainly take up a lot of chest space...but they are not -- the 2009 Turin games takes the top spot with 107 mm medals.  Also, not to take any glory away from Michael Phelps...but in my mind, Mark Spitz will always be remembered first.)