(I wrote this "article" 25 June 2010 for possible inclusion in the Montgomery Advertiser's printed edition. It never saw the light of day...but I decided to dig it out a year later because I think the story still needs to be told -- it IS a nice story about a nice person and I've always felt the media needed more such subject matter. But crime and controversy sells, so the bad gets the coveted first pages and good things are relegated to teeny-tiny columns hidden on the last few pages, or, unfortunately, as in this case...the trash bin.

I left this piece exactly as it was submitted...so please bear in mind I didn't alter it in any way -- facts and figures have undoubtedly changed since. I thoroughly enjoyed the entire process: finding an interesting subject to report on, interviewing, writing, etc., -- hopefully you will remotely enjoy reading it.) 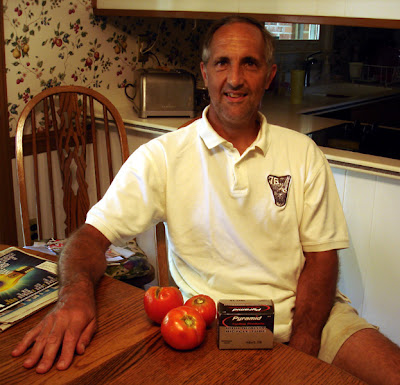 The old adage "You get what you pay for" doesn't hold true for anyone who has reaped the benefits of Freecycle.org. You see, Freecycle.org doesn't sell anything whatsoever, but that doesn't necessarily mean you come away empty-handed. Every single day countless people across the nation are giving away or seeking things totally free of charge; and here in the Montgomery area, one of the most prolific "give-awayers" is Raymond Tyc.

And anyone who is a member of Freecycle knows of Ray as well. Ray, how should I say, can never be confused with any other Freecycler out there. Sure, there's been some who've tried to copy him, but they can't hold a candle to the master (even IF they got that candle for nada on Freecycle).

Most people who give away things on Freecycle tend to be matter of fact about it: OFFER: Refrigerator. Doesn't work. Must pick up.

But not Ray. He might be giving away the most insignificant item in the whole universe, but the story he conjures up regarding it (many times with his wife as the foil - a fact she is totally fine with), will make it look so good you couldn't possibly pass it by. And, truth be told, you'll look forward to the next thing he’s giving away, if only for the tale that's told. This man definitely has the gift of gab, which, I'm sure, we won't ever see up for grabs on Freecycle.

When I sat down to interview Ray at his house the other day, I had visions of a door opening, just wide enough to squeeze through, and being led by the hand across a knee-high strewn jungle of junk accumulated over someone's lifetime. But it was nothing like that...everything was neat as a pin and nothing piled up from floor to ceiling as far as I could see.

The obvious question to ask right out the gate was, "Why do you do this?" Certainly with the things he's given away over the course of two years (sofas, a dining table, cd players, tape players, T-shirts, a child's ride on-jeep, etc.) he could have amassed a tidy little profit; upwards of three-thousand dollar's worth by his own account "if you had to buy everything new". Ray responded, "Part of why I do it is just because it's fun, part of it's because I have no need for objects or material goods. I was a collector of things when I was young...I've moved on."

The highest priced item he’s given away? “Either the chipper/shredder or the stereo system.” And, he confessed, about one-third of the things given away, he’s picked up from curbs. He “hates stuff being trashed” so he “picks it up and Freecycles it”.

He admits the first person who responds by email rarely gets the item, “Whoever strikes my fancy the most gets it; courtesy and appreciation wins over quickness.”

As far as gratitude goes, Ray states, “Only about ten percent of people ever send a ‘thank you’ email, but a lady who once claimed my 1968 Radio Flyer wagon even sent me a photo of it after she painted it green.”

While he might not get public accolades and the adoration of millions, I somehow get the feeling the 56 year-old retired USAF engineer will continue his charitable ways while also fascinating us with his witty stories for the long haul. "I'm a terrible salesman" he confesses to me, but I don't buy it at all.

And another thing I didn't have to buy, and true to his generous nature: I left his house with a shopping bag full of tomatoes and peppers straight from his beautiful garden. Whoever said "there’s no such thing as a free lunch" certainly never met Raymond Tyc.

The Freecycle Network is a nonprofit organization founded in May 2003 to promote waste reduction in Tucson, Arizona. It currently has over 3,500 community groups and millions of individual members in over 70 countries.

Spooning It On a Little Thick

Behold the wonder that is the miraculous "multi-purpose" spoon: 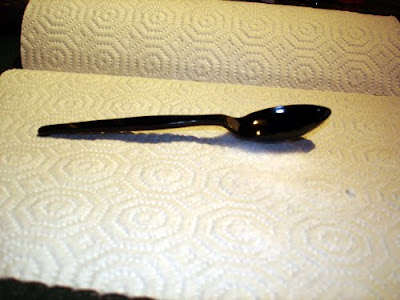 Sure, it might look like an ordinary spoon to the common eye...but I sensed something was a bit special about this run-of-the-mill plastic beauty which made it anything but...run-of-the-mill.

We went to the Georgia Aquarium the other day, which is a very nice aquarium; altho, for some reason I keep thinking the Baltimore Aquarium was nicer. But as we were strolling around from one exhibit to the other "Tropical Waters", "River Dwellers", "Cold Water Creatures", etc., we stopped for a drink in their cafeteria. And that's where I first spotted "it".

My first clue "it" was indeed going to be nothing like I had ever laid my eyes upon before -- was the labeling of the implement holders themselves. Keep in mind this place had a Starbucks...so it was pretty swanky, ya know. I say this for you doubters out there who think I might be exaggerating a bit or making this stuff up. I'm not.

The implement bins were labeled "Forks", "Knives" and, one would probably automatically think "Spoons" or even "Sporks" given their sheltered existence and the mere fact they couldn't point out an oyster fork from a bone marrow spoon even if their measly little pathetic lives depended upon it. The Georgia Aquarium holds balls...actual formal "Cinderella"-type ones...so these people aren't in the least uncivilized or uncultured.

Nay, spoons and sporks were not to be had at a place as grand as this. This place had "multi-purpose" spoons.

I absolutely kid you not. I checked on the Internet when I got home - and sure enough, they are indeed "multi-purpose". Of course, at the time, I was just in amazement as I reached to touch the magical "push down -- receive a dining implement of your choice" machine. Typically, I've only ever seen these reserved for usage of straws alone...so again, you can tell we aren't dealing with any old "reach on in and touch all the spoons with your grimy unwashed 'sea urchin/sting ray petting' fingers before you come to the one which tweaks your fancy" open bin holder.

This was an elegant establishment...there were no plain-Jane white plastic "silverware" to be had anywhere here. Black will always be the topmost when it comes to designer kitchens and couture dresses and such...after all, they wouldn't say "Beige is the 'New Black'" if it wasn't, right? Having the wherewithal to stick to this shocking and avant garde principle at the Aquarium -- they're proclaiming that "black is not only the new black...but the ONLY black" when it comes to your fine plastic dining pleasure.

So, when I wrapped my eager fingers around my onyx beauty...I knew I was in possession of something truly novel. It had to be...and the 'black on white laminated printed sticky label' they use to differentiate the various culinary items there certainly wouldn't mislead me.

I sat down, virtually mesmerized by my new acquisition. I gazed at it from all angles like Keanu Reeves did with his spoon in "The Matrix". Only there WAS a spoon...I knew it...and I had it.

I set about trying to fathom all the wondrous things this "Swiss Army Knife of Spoons" must be capable of doing. It didn't take me long to come up with a few.

-- You can use it as an actual spoon.

-- You can use the bowl to measure liquid things which are inside it.

-- You can use the bowl to measure dry things which are inside it.

-- You can put it upright and measure how many "spoons high" something is.

-- You can use it as a knife if you have very, very soft foods you really need to cut.

-- You could poke something with the remotely pointy end of it.

-- If I would have taken two...I probably would have been able to "play spoons" with it. Oh, the wondrous magical noises they would have generated, too. I'm smacking myself in the head (of course using my "multi-purpose" spoon to do so) for not getting a second spoon to find out how sublime the harmonics on these babies woulda been.

-- You can form nice dents in soft foods and things like Pla-Doh with it.

-- You can use it as a fork if you already have a fork which you then use to transfer what you just picked up with that fork...onto the bowl of the spoon.

-- You can use it to fling things at people - like a very tiny plastic trebuchet.

The possibilities are virtually almost limitless.

Eventually I had to put my spoon away and get up to see some stupid "Garden Eels" which hovered partway outside their holes until they sensed danger and then retreated back inside them...only to pop back out...and do it all again...a never ending display reminiscent of that "Whack-a-Mole" game. Then just a few displays over were some type of fish, which, when building their nests, would suck up a bunch of sand and shell debris into their mouths and then deposit it outside their little love abodes...making everything look as inviting as they could to capture the attention of the über-choosey lady fishes.

I smirked my little smirk as I saw them continually gather and spit, gather and spit, gather and spit...knowing full well if one of them could be trained on the usage of what I now held in my purse...the "multi-purpose" spoon...it would move that whole evolutionary business up a notch or two on some type of hierarchy food pyramid. Heaven knows, if it could catch on, what those animals might possibly come up with by the time I visited again.

But for now...nature as we know and like it...is safe. I have my "multi-purpose" spoon and good things are going to be coming my way now...I can feel them. And when they get here, I'll be prepared.

Perhaps I have finally found my one true purpose in life? I might be destined for even greater purposes...as I now can handle multi-purpose things...presumably well beyond the scope of others.

Yeah...I think I'm going to like having a multi-purpose in life.