There are a few of these "theme" ideas which made me wonder. As I like to think out of the box and I'm not a photographer in the proper sense of the word...the photographs I have put on here, while not going to win any competition, reflect an image in my head. I'm more a writer (don't laugh) and I believe, because I see things in "scenes" when I write...I think I would be a good script writer...such as for films. So, when I do a few of these themes...I do them - probably with a bit of a different mind, than say, a serious photographer would. I don't think that's horribly wrong - it's probably just making real photographers roll their eyes the way I roll my eyes when I read "so-called" journalists writing for the Huffington Post. So, if I've evoked any rolling of the eyes from you...I completely understand. I've been learning a bit here, too. I'm just not a "setter-upper" - I'm more a take the photo and make it fit the theme. Give me a photo of a blank piece of paper and I'll give you a reason why I thought it represents the pyramids. But...I think that's not how proper photographers think...so I am definitely thinking out of their realm. You have all been nice to allow me into your world and to say such nice things about what I've done. And for that - I am grateful. Very much so.

Before I start cueing in the National Anthem for tugging on heartstrings effect, let's take a minute to give a shout out to Ziva - because, without her, we all wouldn't be on this photo-mission. And another shout out to all these remarkable people -- who just so happen to be my fellow participants in this photography non-contest: MikeWJ, Nicky and Mike, Mo, Meleah, John, aka nonamedufus, Bryan, aka Unfinished Person, Malisa, Nora, LaughingMom, Tanya, Elizabeth A., 00dozo, Cheryl, Kristen, Katherine, and, last -- but definitely not least, Ziva.

Day 17: My take on "Time"...
Clocks...hourglasses...sundials, the rising and setting sun, the phases of the moon, plants growing, flowers blooming, leaves falling off trees...all legitimate ways to get your point across about time.

I wanted mine to be more personal - to show the progression of time. It's not the first time to be done and it won't be the last...but it's my time, so to speak.

Below is a split photo of me...the left side (as you look at it) was when I was 26. It was my passport photo. The right side...is me, now, at 51 years old. Because of the angle of my chin in the right half...we couldn't merge it completely right and I didn't want to Photoshop any of the lines, shadows, or droopy bits away. Basically there's much more shadow under that part of my chin - but, as you age, parts of you keep growing...like the tips of your nose and your earlobes...or they probably just get saggier as that's what the rest of our bodies seem to do. Perhaps the chin changes, too. I know the little area - known as the "jowls" - get more prominent and sag as we get older. But other more subtle things seem to change as well. You can't really tell it - but I have much more hollow cheekbones now...and I have that "Greta Garbo" eyelid look going on. I actually like that bit. My lips seem thinner and they go a bit more down-turned than they used to...and my eyes aren't as wide open as they used to be. But...I don't think I've really wrinkled up like a prune...and for that, I am glad. 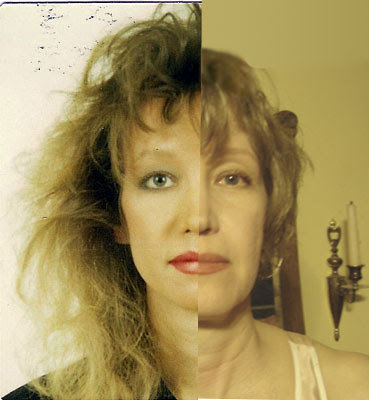 So...there you have it - my face...a block of time frozen forever by a shutter click. Twenty-five long years...my face spanning a quarter of a century...one score and five years ago. Either way you say it - it's been a while. Hopefully time will be on my side...for the next 25.

(Thanks go out to my son, Alex, who basically Photoshopped my two me's together - and would have been able to do the chin better if the angle wasn't as lopsided as it was...but he was the master morpher...not me.)
Posted by Mariann Simms at 7:00 AM