I've just now seen video of the Fun Zone (Montgomery, AL) here on television...and all I can say is that the manager (I don't know her name...I've only been hearing information on the news here for the past few hours) and anyone else responsible who had the forethought to move 31 children out of that (part of the) building before weather warnings were even issued, really needs to get some great recognition. Without those timely actions there could have been...and most probably would have been...lives lost. They really deserve some praise...and more than just at the local level.

I've just heard the name "Lisa Elliott" (sp?) mentioned by the owner of Fun Zone, Lisa McIlwain, stating that Elliott is the manager of The Learning Zone...I am not sure if she's the sole person responsible or if there are others, but I did hear the owner credit her for moving the children out of the building. Again, all involved should be duly acknowledged.

They have since given credit to Liberty Duke...and I definitely wanted to make that known here as well. She did a wonderful thing and again, I hope she gets the recognition that is due her...altho I think just knowing what she's done in her heart and the gratefulness of the parents has got to be such a terrific feeling in and of itself. 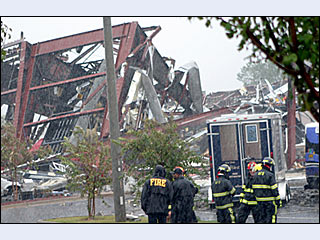 Fun Zone: The Aftermath of a Possible Tornado
Posted by Mariann Simms at 1:55 PM